Mild TBI Symptoms
Although the classification says mild it is a bit misleading. There is nothing “mild” about a traumatic brain injury (TBI). However in order to better diagnose the severity of the injury, the American Congress if Rehabilitation in 1995 coined the term and set up the following guidelines in an attempt to better diagnose the injury.

TBI can be classified as mild when one of the four following conditions exists.
• Any loss of consciousness (referred to as LOC)
• Any loss of memory for events leading up to and immediately before and injury.
• Any alteration in mental status at the time of the accident.
• Focal neurological deficits that may or may not be transient.

The injury cannot exceed the following severity either:
• L.O.C. for more than 30 minutes
• Post traumatic amnesia (P.T.A.) for more than 24 hours.
• Initial Glasgow Coma Scale ( G.C.S.) less than or equal to 12

While MRI and CAT scans are often normal, they usually have negative radiological findings. One major problem is that these injuries are commonly overlooked.

In particular when involved in sporting events where the pressure to perform may be great and the individual prone to ignore the symptoms and place themselves in greater danger. This is when an accurate assessment is most important and not allowing further participation if the symptoms are positive, a prudent thing to do.

In some cases the person looks normal and moves normal in spite of not feeling or thinking normal. This makes the diagnosis easy to miss. Family and friends often notice changes in behavior before the injured person realizes there is a problem.

Mild Traumatic Brain Injury FACTs:
• Most prevalent TBI
• Often missed at time of initial injury
• Most mild TBI patients have a good recovery with symptoms clearing up within the first few weeks or months post injury, usually within 1-3 months.
• 15% of people with mild TBI have symptoms that last one year or more.
• Post injury symptoms of social and vocational difficulties are often referred to as post concussive syndrome.

MILD TBI and SPORTS
As mentioned briefly before classification of a concussion is controversial. Given the fact that during team events that may have big implications like a championships or playoff game, the pressure to play can be immense and cause a lack of proper decision making on part of both the player and coaching/medical staff.
To help in determining whether a player should play a widely used guideline are the Colorado Medical Society and Cantu Guidelines.
Grade Cantu Colorado
Grade I—mild • No LOC- PTA < 30 min • No LOC – Confusion w/o amnesia
Grade 2—moderate • LOC < 5 min – PTA > 30 min • No LO Confusion with amnesia
Grade 3—severe • LOC > 5 min – PTA > 24 hrs – LOC

WHAT HAPPENS IN A MILD BRAIN INJURY? 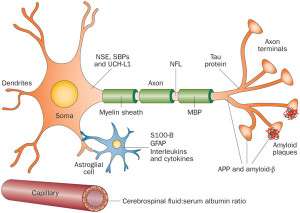 To better understand this one has to understand that the brain is not fixed within the skull/brain cavity but rather “floats” in cerebral brain fluid. The brain is not hard like a bone or muscle and is more of a jello soft play doh type substance made up primarily of water and fat with a vast array of nerves fibers called neurons.

Have you ever ridden in a car that stops suddenly and the force of the stop pushed you forward? Well that is what happens within the head/skull of someone that has suffered a TBI. Think of the skull as the car and the brain as you. When you get pushed forward during an abrupt stop, your seat belt may stop you from going too far forward or you may put your hands up and brace yourself against the dashboard or seat. 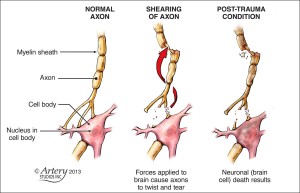 r walls of the skull causing bruising or hematomas. In some cases the brain rotates or moves awkwardly and rapidly inside the skull causing tears or stretching of the neurons. When this happens it is called Axonal shearing and is very serious. This is what happens when someone gets knocked out like in Boxing. Thus the old adage of boxers being “Punch Drunk”.

Because neural cells require a precise balance and distance between cells in order to effectively process, send and receive messages, the stretched, bruised and damaged cells cannot. These results in the problems outlined above.

Welcome to the site of TBI Survivor Extraordinaire Jessica Toresco. Our mission here is to share our experience with TBI in order to help others gain perspective on what to expect going forward.

TBI not only effects the person who has suffered it but also family, friends and care givers. It can be a physical, emotional and financial nightmare. But it is not the end of the world.

Our Goal is to provide useful information as well as a place to share your story in order to help you and others overcome and adapt to life after a TBI.

Please subscribe, like and share your story with us. We welcome any suggestions you may have on how to improve the site. Just let us know what you think.