As discussed in the article “What is TBI” we explained that there are two types of Severe TBI, described as closed head and Penetrating. These severe head traumas are further categorized as moderate and severe.

Head injuries or head traumas contribute to a large number of deaths and for those that survive a large number of wide ranging permanent disabilities. According to the CDC TBI is the contributing factor for a third (1/3) of all injury related deaths and in 2012 estimated that 2.5 million people sustained some type of TBI.

Sever TBI, like the name implies is a serious affair. For those that survive chances are a life of permanent neurological damage that for some can get considerable better over time. BUT each case is different and there are no guarantees that any certain individual will recover 100%. 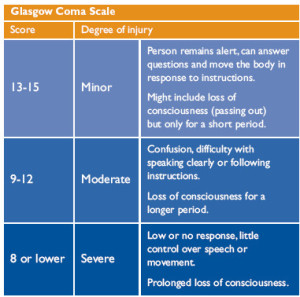 *Severe TBI may result in an extended period of unconsciousness (coma) or amnesia after the injury. For individuals hospitalized after a TBI, almost half (43%) have a related disability one year after the injury. A TBI may lead to a wide range of short- or long-term issues affecting:

• Emotion (e.g., depression, anxiety, aggression, impulse control, personality changes)
Moderate to severe traumatic brain injuries can include any of the signs and symptoms of mild injury, as well as the following symptoms that may appear within the first hours to days after a head injury:
Physical symptoms

• Loss of consciousness from several minutes to hours

• Persistent headache or headache that worsens

• Dilation of one or both pupils of the eyes

• Clear fluids draining from the nose or ears

• Inability to awaken from sleep

• Weakness or numbness in fingers and toes

• Agitation, combativeness or other unusual behavior

• Coma and other disorders of consciousness

Approximately 5.3 million Americans are living with a TBI-related disability and the consequences of severe TBI can affect all aspects of an individual’s life. This can include relationships with family and friends, as well as their ability to work or be employed, do household tasks, drive, and/or participate in other activities of daily living.

* image is from American Journal of Neuroradiology

* Information obtained from the CDC

Welcome to the site of TBI Survivor Extraordinaire Jessica Toresco. Our mission here is to share our experience with TBI in order to help others gain perspective on what to expect going forward.

TBI not only effects the person who has suffered it but also family, friends and care givers. It can be a physical, emotional and financial nightmare. But it is not the end of the world.

Our Goal is to provide useful information as well as a place to share your story in order to help you and others overcome and adapt to life after a TBI.

Please subscribe, like and share your story with us. We welcome any suggestions you may have on how to improve the site. Just let us know what you think.